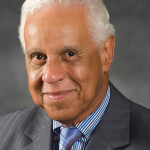 Mr. Wilder became the first African-American to be elected governor in the U.S., leading the Commonwealth of Virginia from 1990 to 1994. As the Commonwealth’s 66th governor, he was commended for his sound fiscal management and balancing the state budget during difficult economic times. Financial World magazine ranked Virginia as the best managed state in the U.S. for two consecutive years under his administration. Prior to his time as governor, he served as lieutenant governor from 1986 to 1990.

As a state senator representing Richmond from 1969 to 1985, Mr. Wilder became the first African-American state senator in Virginia since Reconstruction. During his five terms as a state senator, he chaired committees on Transportation; Rehabilitation and Social Services; Privileges and Elections; the Virginia Advisory Legislative Council; and the Senate Steering Committee, which appoints committee members. He successfully sponsored Virginia’s first drug paraphernalia law and the compulsory school attendance law. For eight years, he persisted in sponsoring legislation that eventually led to establishing a state holiday honoring Dr. Martin Luther King, Jr. making Virginia the first state in the nation to have a legislative holiday for Dr. King.

In addition, Mr. Wilder was principally involved in the appointment of the first African-American judges to serve on Virginia’s state and our federal courts. During his service to the Commonwealth, he was chiefly responsible for the drawing of a congressional district with a majority of African-American voters and he was able to convince the General Assembly to support his plan to create single member legislative house districts, which also increased the number of African-American house members.

Finding the fiscal problems and social injustice of this great nation intolerable, Wilder declared for the presidency on September 13, 1991. He strongly felt that a message of fiscal prudence, racial healing and caring for people had to be delivered to America. But, on January 8, 1992, citing his responsibilities as governor to be paramount, Wilder withdrew from the race to rededicate all of his attention and energies to the Commonwealth of Virginia.

He was appointed chairman of Governor Mark Warner’s Commission of Efficiency and Effectiveness in 2002 and also that year, he co-chaired the Wilder-Bliley Charter Commission that advocated the at-large election of mayor in the City of Richmond. Citizens overwhelmingly approved this measure by referendum in 2003.

Persuaded to run for mayor in 2004, Mr. Wilder received eighty percent of the vote and carried each of the City’s nine council districts and every precinct in the City. He was sworn in as Richmond’s first elected mayor in 2005 and served until 2009, making him the first African-American mayor elected by popular vote all from all of the citizens of Richmond.

Richmond became the first and only city in Virginia to adopt the “strong mayor” system, like the strong mayors of Chicago, New York and Houston, with powers that included submitting the annual budget, having line-item veto authority, and introducing tax rate proposals and other budget ordinances.

During Mr. Wilder’s term as mayor, Richmond made remarkable progress in its fight against crime, having its lowest rate in 27 years. Downtown economic development and neighborhood improvements were widespread, and financial management reached a new level of scrutiny that served the taxpayers well.

At present, Mr. Wilder is a Distinguished Professor at Virginia Commonwealth University’s L. Douglas Wilder School of Government and Public Affairs. He also is the driving force for establishing a National Slavery Museum. Though he’s now an octogenarian, Mr. Wilder has not slowed a bit. He’s still a highly-involved and highly-dedicated citizen of the city that he has called home for most of his life, and one of its best and most outspoken ambassadors.